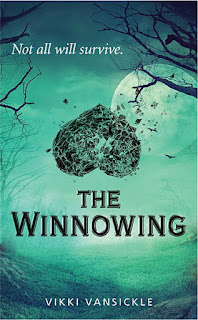 The Winnowing by Vikki VanSickle

The Premise from the Publisher: "In a world where the familiar has sinister undertones, two friends are torn apart just when they need one another most. Can they both survive? Marivic Stone lives in a small world, and that’s fine with her. Home is with her beloved grandfather in a small town that just happens to be famous for a medical discovery that saved humankind — though not without significant repercussions. Marivic loves her best friend, Saren, and the two of them promise to stick together, through thick and thin, and especially through the uncertain winnowing procedure, a now inevitable — but dangerous — part of adolescence. But when tragedy separates the two friends, Marivic is thrust into a world of conspiracy, rebellion and revolution. For the first time in her life, Marivic is forced to think and act big. If she is going to avenge Saren and right a decade of wrongs, she will need to trust her own frightening new abilities, even when it means turning her back on everything, and everyone, she’s known and loved" (Scholastic).


My overall thoughts and review: When I first read the description of the book, it was also brought to my attention that the story would be The X-Files meets Stranger Things (two shows that I love). I was immediately drawn in by that, but also VanSickle's world building in the text. The story takes place in a small town, in a world where there was an infertility crisis after WWII. Because of the infertility crisis, a group of doctors formulated a shot called SuperGen and people started having children again. However, most of these children grew up with strange impairments and they had to go through the winnowing process to become better. We follow Marivic and her impairment is along the lines of being able to run incredibly fast & telepathic abilities. She lives with her grandfather and when her best friend, Saren, gets sent off to Barton (facility where they do the winnowing), she quickly follows as well. I really enjoyed the friendship between these two because it was so incredibly strong. They endured a lot together and I loved how upfront they were with one another. Even when tragedy strikes, Saren is a big part of Marivic, and you can really see that as Marivic makes her choices to move forward. I also really enjoyed scenes where she engaged with Daisy and Ren, and as much as Kamal bothered me in the beginning, he did grow on me towards the end. I would've liked to see more of Abbot. I just really enjoyed learning about how these friendships grew. It was similar to other dystopian books where the protagonist discovers the truth, and there already appears a rebel group in the works (winfree). So I really liked that aspect and that it wasn't simply one singular person fighting for the cause. If you liked Veronica Roth's Divergent series, I found Marivic to be quite similar to Tris in many ways. I did feel like the end happened incredibly quickly, especially since the rest of the text was nicely paced. I would've liked to see more of Gumps in the end explaining things to Marivic. I also totally feel like the story doesn't really end there, and it could easily go on for another book or so! Overall, I really enjoyed it. It had wonderful world building, a strong emphasis on family and friendships, and a really intriguing premise of ACES, imps, and the winnowing. I've been a fan of VanSickle's writing for a while, and this one is no different. You should definitely check it out!

Available for purchase at:
Chapters/Indigo, Kobo Books, and Amazon 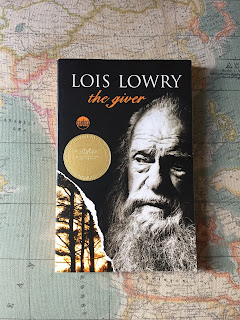 I remember the first time I read The Giver. I was in grade 4, an avid reader with no snobbish preferences for one genre over another. A book was a book was a book. But The Giver blew my world wide open. Not only had I never read a dystopian novel before but I had never considered the concept itself. The idea that society could be ordered and controlled in any other way—and many other ways—was a watershed moment for me. Living in Canada I was a lucky, sheltered individual. I had yet to study world history and learn about communism, fascism, living off the grid, and the many other ways people had lived (or still lived), let alone the ways people could potentially live.

As a book, I think The Giver is as close to perfection as it gets.  Lowry’s pace and the doling out of key information about the world just when the reader needs it is impeccable. I loved that the society Jonas and his family live in isn’t bad or broken, it’s just different. And extreme. I could see the benefits of such a life. But would I want to live there? I’d never considered such a huge, philosophical question in my reading before.

Consider the moment Jonas sees colour for the first time—described as “an indescribable change” and “seeing beyond.” Later, The Giver explains that what Jonas saw was the colour red. This revelation was so astonishing to me as a reader that I went back to the beginning to see if I could find an instance where Lowry had slipped and described the world colour but of course she hadn’t. In this subtle way Lowry taught me that a reader brings their own filter and expectations to a book, and a skilled author can expose this and use it to great effect.

If it’s not obvious, The Giver is one of my favourite books. It’s the gold standard I aspire to. One of the characters in The Winnowing—a neurologist who is part of a group responsible for re-shaping world— bears the last name Lowry. This is an obvious and deliberate nod to Lois Lowry: genius, inspiration, and master world-shaper.

Disclaimer: An advanced reader's copy of the book was provided by Scholastic Canada Inc & the Author (Vikki VanSickle) for participation in the book tour. All opinions of the book are my own.
Posted by christine at 03:25