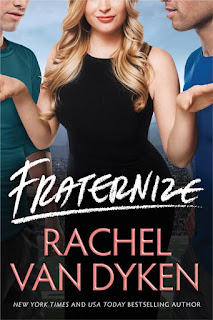 The Premise from the Publisher: "Emerson just made her dream come true as a professional cheerleader for her favorite pro football team. But even though the plus-size athlete is breaking down boundaries, she still has to contend with the massive rulebook. Carbs? Nope. Chocolate? Definitely not. Still, Emerson loves her curves, and she’ll rock the hell out of this job even if it kills her. Except for one mandate that is easier read than done. No fraternizing with the players. Problem one is Miller Quinton: Emerson’s first love, first sex, and the guy who still ignites her daydreams and R-rated fantasies. Thrown back together, Miller and Emerson feel the undeniable pull of passion again, even if the conflict that tore them apart seems insurmountable. Then there’s way-too- sexy Grant Sanchez. He has a serious reputation with the ladies, and when it comes to winning someone he wants, he doesn’t let anyone stand in his way. Now Emerson is breaking every rule in the manual. But what she doesn’t know is that she’s part of a wicked little game—one that could steal both her dream and her heart" (Skyscape).

My overall thoughts and review: So as you all know, I'm absolutely on a romance novel kick, but I have to admit that I haven't read any sports romance books :O This is my first one and it is also my first book by Rachel Van Dyken. It surely won't be my last because after finishing this, I may or may not have gone on a little spree on kindle and bought a bunch of her other books. I absolutely loved the premise of this book and I was excited to see what Van Dyken would do with a love triangle. I find love triangles can often really be one sided and it's super clear from the get-go which guy she'll end up with, but in this one, both guys were such great picks. Emerson is such a lovely protagonist to follow because she's incredibly strong and independent, but also shows her vulnerable side. I definitely empathized and found myself in how she discussed body image and her own insecurities. I loved that Van Dyken didn't give us a traditional protagonist. As someone who is not a size zero, it was great to read about someone working hard to be comfortable in their own skin. Definitely one of my favorite parts about the book was Emerson and how hard she worked to achieve her dream of being a cheerleader for the Bucks. Learning about her relationship with her father also totally hit me right in the feels. I loved learning about her past with Miller, and how their friendship developed. They had such a unique relationship together and it was something that surpassed simply friendship. They had a level of understanding with one another that was really special. I really liked Miller as a character even though some moments he was quite childish and I wish he would've taken ownership for what happened in the past earlier. But guys, the reason why I absolutely loved this book so much is Grant Sanchez. What a character. He's arrogant and definitely has that playboy persona, but underneath, there are so many layers to him. The scene when he goes to Emerson's house and plays checkers with her dad is so precious. He doesn't push Emerson and he is willing to wait for her. You can see him falling for her with every chapter, and it was just so incredibly sweet. I loved how it was a story of both second chances and falling in love again. I don't want to spoil what happens, but I LOVED how it ended ;) I also know next to nothing about football, so it was fun learning about how the game worked and just the overall stress that comes with it. I learned a few tidbits like the rookie dinners, coaches expectations, and regime, and I am definitely on board to read more football books in the future. I loved this book so much and I would highly recommend it if you are looking for a heartwarming romance read. There's a bit of everything and I can't say enough good things about it!

Author Guest Post
Writing Fraternize was probably one of the most fun experiences I've ever had, mainly because I was able to interview real NFL players (most of them retired). I wanted everything to be really authentic, but I had no clue where to start, so I posted on Facebook asking readers if they had any contacts and if those contacts would be willing to chat with me. Shockingly, I had three people get back to me, all of them willing to talk! One was a doctor for one of the teams, and the two other men were past players who were now retired and enjoying life off the field with their families.

I came up with a list of questions like, is it true that the rookie dinner is basically something that the other team members make you do so that the rookies have to pay for all the food? What kind of things happen during the locker room pre-game pump? Are guys really that mean on the field, what things do they say in a huddle? And a personal favorite, when a kicker misses, are you angry at them?

The answers that I got blew my mind! Especially the one where I found out that one of the rookie dinners ended up costing over 40K dollars. Yeah. Insane, right? Another answer that I heard from a player was that when a kicker misses, the entire team is angry, not because they missed, but because they have one job, and they need to do it. It was said by one of the players I interviewed, that most kickers dont even have to show up for all the summer practices so basically they're out hunting and hanging out, and show up right before pre-season meanwhile all the players are sweating buckets and ready to puke.

For the most part, they all had similar answers about just loving the game. I'm an avid football fan so I basically nerded out over all the answers and honestly wrote this book so fast not because of a deadline but because I had so much fun in this world! I think you guys are really going to enjoy it! 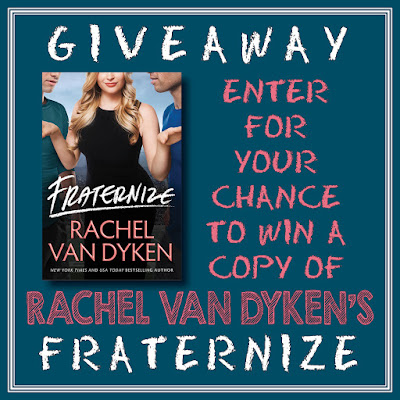 The winner will receive 1 copy of Fraternize by Rachel Van Dyken!
Giveaway Details:
- Canada Only (full rules found in the T&C on Rafflecopter)
- Giveaway ends on September 28th at 11:59 am EST
- Winner will be drawn randomly through Rafflecopter, contacted via email & will have 48 hours to claim their prize
a Rafflecopter giveaway

About the Author
Rachel Van Dyken is the New York Times, Wall Street Journal, and USA Today Bestselling author of regency and contemporary romances. When she's not writing you can find her drinking coffee at Starbucks and plotting her next book while watching The Bachelor. She keeps her home in Idaho with her Husband, adorable son, and two snoring boxers! She loves to hear from readers!

Be sure to check out the other stops on the blog tour! Show some fellow bloggers some love in the comment sections and check out more exclusive Fraternize content. 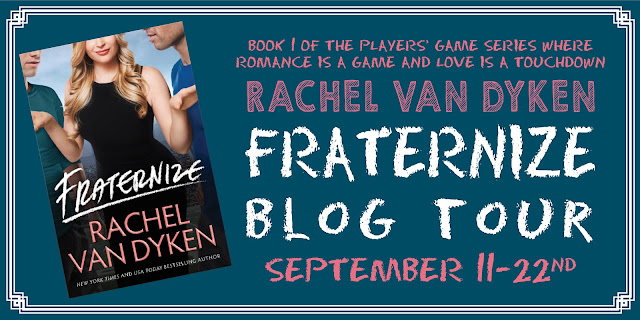 Disclaimer: An advanced reader's copy of the book was provided by Thomas Allen & Son for participation in the book tour. All opinions of the book are my own.
Posted by christine at 05:00