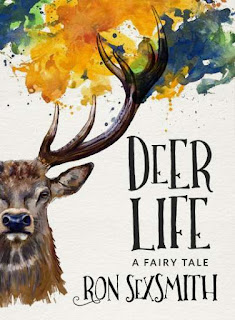 The Premise from the Publisher: "Deryn Hedlight was not having a very good day and it was about to get much worse. He’d read stories of witches as a boy, but never believed for a second they were true. That is, until an unfortunate hunting accident turns his world upside down. What seemed like an honest mistake leads to an altogether unexpected transformation. But poor Deryn wasn’t the only wronged character tied up in these gloomy circumstances and sinister forces. Deer Life tells the story of a kind-hearted boy from Hinthoven and his motheṟs undying love. Mostly though, it’s all about patience, friendship, and heroism where you least expect it" (Dundurn Press).

My overall thoughts and review: I remember working at Second Cup during highschool and always having Ron Sexsmith's music playing in the shop. I've always liked his mellow, soft, melodic tunes, and when I heard he was coming out with a book, I was intrigued. It's always interesting to see people of different professions attempt writing. This book was pitched as a middle grade fantasy but something a bit darker with witches and transformations. The novel also includes some of Ron's illustrations of the characters which was nice since it didn't leave it to the reader to visualize certain characters. I must admit, I had a bit of difficulty reading this book because I felt like it jumped around a lot in terms of conversations and setting. Even though there were designated chapters, I found the pacing a bit difficult to follow. There a quite a lot of characters to follow and I found you didn't really get as much character development/background that you would get with the large number of characters. Sure, I enjoyed seeing Deryn and scenes between him and other characters, but I really wasn't invested in his story. I was more curious about the witch to be honest. I also wished there were more scenes between Claira and Tressa in particular, because I think if given more information about them, I would've loved reading about them. Overall, it was a decent fairy tale, and for a middle grade book, it is incredibly short, so I believe that it could've been expanded a bit more in terms of length for character background. Ron mentions in his Q&A a possible prequel/sequel to explain the witch's motivation which is also good. I did like how the narrator had a role in the text and it reminded me a bit of Tahereh Mafi's Furthermore. All in all, it is a decent middle grade CanLit fairy tale, but I wish there was more character background since I didn't feel particularly connected to any of the characters.

Available for purchase at:
Chapters/Indigo, Kobo Books, Amazon and Dundurn

Author Questions and Answers
1. What was the inspiration for Deer Life?


It presented itself to me one morning while I was still in bed and floating in and out of sleep. At first I thought it was an idea for a movie and so I wasn't sure what to do with it.

2. In the Preface of the book, you mentioned that the story came to you as a morning dream of sorts. Do you still see more of Deryn's story in your dreams?


I don't see his story in my dreams anymore but when I'm walking around I still think about it and see more of the story that isn't in the book.

3. Can you talk a bit about how writing songs is different from writing a novel, in terms of your own process?


With songs you have the luxury of melody and repetition. You can base your second verse on the first verse etc. With writing this book, I felt completely out of my element, I had so many questions along the way, and there were many things I wanted to do but didn't know how to do.

4. What do you hope your readers take away from the book?


I hope the readers like the story and the characters as much as I do.

5. What are you now working on Post-Deer Life?


I'm working on songs for a musical based on the book and I'm also writing a Prequel/Sequel to Deer Life that I hope will fill in some of the blanks in terms of the witch's motivations and her connection to the Grimsby's.

Thank you so much, Ron, for stopping by and answering these questions! Be sure to check out the other stops on the blog tour for more Deer Life content! 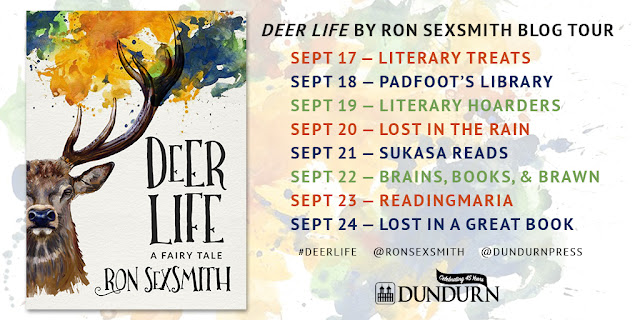 Disclaimer: An advanced reader's copy of the book was provided by Dundurn Canada in exchange for an honest review. All opinions of the book are my own.
Posted by christine at 04:00