Hi everyone. I hope that you are all having a great start to your week. I have a super exciting post for you all today and that is a review for Ann Y. K. Choi's Kay's Lucky Coin Variety and at the end of the review, an exclusive from the author herself: a written piece on "behind the story"! :D I had the opportunity to meet Ann at Simon and Schuster's Spring Fiction Launch a few months back and she was the absolute sweetest. The premise of her novel sounded right up my alley and I loved chatting about it with her! 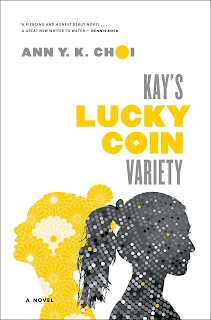 The Premise from the Publisher: "Mary--or Yu-Rhee, as her Korean parents named her--doesn't always agree with her determined, traditional mother, who knows what is best for her daughter. In the first novel about the contemporary Korean experience in Canada, Ann Y.K. Choi brings our attention to the timely issue of immigration, and the hopeful sacrifices of starting over" (SSC).

My overall thoughts and review: When I first heard about the premise of the book, I was really excited. Being the daughter of someone who immigrated to Canada and growing up hearing stories, I felt like this story would offer me a look into my mother's experiences in a way. Also, my mom is a single mom and we are super close and I'm always drawn to Mother/Daughter stories. Ann did not disappoint. This has got to be one of my favorite reads from 2016. I loved this book so much! To begin with, Mary is such a strong protagonist and I really identified with her. The internal conflict of following one's desire and also wanting to please one's parents was something I really identified with. She is strong-willed, determined (like her mother), but also perfectly described as a teenager going through the motions. I loved moments when she stood up for herself and also the self-reflexive moments. Mary's family was also an integral part of the novel that I really enjoyed. Her mother, reminded me a lot of my mother: also strong-willed and determined.  The book tackles the issue of immigration from all perspectives. We see it especially in the scenes where the family temporarily returns to Korea and how hard immigration can be. To embrace the new life but also incorporate traditional values was a big point of the book. I found the story of how Yu-Rhee's "western" name was put in place really interesting and it made me think about how much people who immigrate to new places change of themselves to adopt to the new setting. I'm glad that Ann mentioned this because it is the true reality of things.

I also loved the setting of the book. I grew up in Toronto when I was younger and I only recently moved back. I loved all the references to places and areas that I've visited. I also chuckled about how her parents believed University of Toronto to be the only university option because I struggled with this growing up as well ;)

The book also tackles really taboo and dark topics such as: sexual assault, falling in love with a teacher and also destructive relationships. I found her betrayal of a manipulative individual (no spoilers) so accurate and how that leads to a very destructive relationship. Choi does such a fantastic job of touching on these topics and also speaking about the consequences of each. I loved that she did not sugar coat anything. Overall, this was a wonderful coming of age read that spoke about the struggles of immigration, the difference between wanting to please your parents and doing what is best for yourself, and family. I loved this book because I identified with it so much as an individual - I felt like it spoke to me on a personal level and I definitely had a new perspective on immigration and the struggles of it upon closing the book. I am going to share this book with my mom (who does not read often), because it is such a realistic account of events and emotions. I think all readers will enjoy this because it brings together questions of identity and home, and Choi has such a lovely style of writing that immediately draws you in. Highly recommend!

Author Exclusive: Behind the Story of Kay’s Lucky Coin Variety By Ann Y.K. Choi
Set in the 1980s, a decade made memorable by its music, fashion, and pop culture, my protagonist Mary grows up watching movies like The Breakfast Club and listening to songs like “Girls Just Wanna Have Fun.” Queen Street, west of Yonge, was undergoing major changes with the gentrification of the area, although Queen near Trinity Bellwoods Park, where the novel’s variety store is, was still lined with cheap restaurants and small independent businesses. The customers were an interesting blend of immigrant families, local artists and musicians, prostitutes, and the homeless. Besides the usual cigarettes and milk, neon bracelets and locker-sized posters of Wham! and Duran Duran were best sellers.
Few people understand how demanding life that revolves around a variety store is for the family. Our convenience store was open seven days a week, from 7:00 a.m. till 11:00 p.m. This meant that, as a family, we never ate meals together – someone always had to mind the store, and we lived with the constant threat of being robbed or assaulted, both verbally and physically.
As young children, my brothers and I laboured at school because our parents demanded academic excellence. They were convinced that education was the only means of climbing the social ladder. At the same time, we were expected to help out with the store; and when we weren’t at school or doing homework, we were stocking shelves or tending the cash register.
It wasn’t until I studied sociology and psychology at the University of Toronto that I started to wonder about the possible impact this experience could have. I was curious enough to informally interview thirty-nine Korean female students. Common themes surfaced. Many of us were unhappy. Angry. We felt burdened by our parents’ expectations, trapped between two cultures, and we struggled with our sense of identity and belonging. And, not surprisingly, most of us were battling with some sort of mental health concern, depression and anxiety being the two most common. It never dawned on us that we had a right to be happy and that we had a right to our own voice.
My sociology studies provided me with some powerful insights. They allowed me to understand the connections between my personal experiences and the larger society I lived in. But I found that I didn’t want to think critically about the immigrant experience. I didn’t want to spend long hours drafting research questions and then analyzing the data. Instead, I wanted to write poems, maybe even a novel. I wanted to tell stories.
The idea to write this book emerged in 1991. However, it wasn’t until 2007, when I went back to the University of Toronto to take a creative writing course, that I first wrote the story in the form of a short story. It took another five years to become a novel. In retrospect, it was a good thing that I waited. When the idea for the book first came in the nineties, I was an angry young woman, determined to write a book that reflected my inner chaos. Back then, writing only led to greater frustration because I was afraid to delve into the things that I truly wanted to explore – family conflicts, mental health, discrimination, and prejudices.
Having my daughter changed me as a person. While I grew up feeling embarrassed and at times even ashamed to be Korean, I became determined that my own child would be proud of her Korean heritage. She needed to know her grandparents and her mother’s struggles when they first settled in North America. I wish I could say that the store and its demands, as well as the early years of immigrant struggles, seemed like distant memories, but they continue to live close to my heart. They spill easily onto paper now that I’ve finally found my voice. Beyond my daughter, I feel compelled to share stories with others, which capture on paper what is now slowly becoming a thing of the past as the second and third generation of immigrants leave the life of the family-run business behind.

Thank you so much, Ann! This was a lovely piece and it was great to learn the inspiration and history for the book :)

Be sure to check out the other stops on the blog tour: 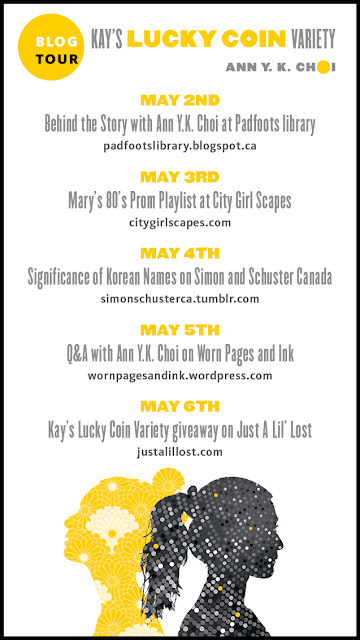 Disclaimer: I was sent a review copy of the book by Simon and Schuster Canada in exchange for an honest review and my participation in the blog tour.
Posted by christine at 05:50